Caribbean countries should be ashamed of supporting Venezuela at OAS meeting

Here’s the million-dollar question about the failure at this week’s Organization of American States’ meeting to strongly condemn Venezuela’s autocratic regime: How could a few tiny Caribbean islands defeat a resolution that was backed by the United States, Canada, Mexico, Brazil, Argentina and 15 other major countries in the region?

It sounds ridiculous, but that’s exactly what happened at a June 19 special meeting of the region’s foreign ministers in Cancún, Mexico, to discuss the break of democratic rule in Venezuela.

At the meeting, 20 countries voted to support a strong resolution that would have demanded Venezuela’s President Nicolás Maduro stop his plan to convene a constituent assembly to draft a Cuban-styled constitution. It also would have asked Maduro to respect the rights of the opposition-majority National Assembly, and to allow a “group of friendly countries” to mediate in the Venezuelan crisis, which has already left 75 dead in recent weeks.

But St. Vincent and Grenadines, Dominica and St. Christopher and Nevis — alongside traditional Venezuelan allies Nicaragua and Bolivia — voted against the motion. And other Caribbean countries such as Haiti, the Dominican Republic, Grenada, Trinidad and Tobago and Antigua and Barbuda abstained, in effect killing the resolution that would have required a 23-vote majority to become mandatory. 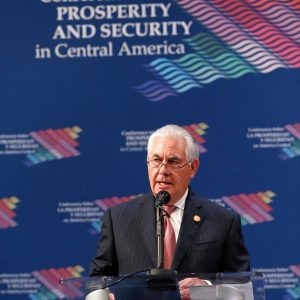